Forum rules
This section of the forum is a great resource if you're looking for ideas, and it's a cool way of obtaining technical information that may otherwise not have been posted. (Members can use the Search functionality at top right of the forum to speed up finding things) Please respect others' contributions and don't diss anyone - keep comments helpful, factual, positive and polite. One thread per vehicle or owner please - don't start lots of threads about just one car. And if you need assistance with your car and want to host a spanner day, please use the appropriate section of the forum: http://mr2.org.nz/phpbb3/viewforum.php?f=35 Thank you.
Post Reply
32 posts

This little gem was found on facebook about a week ago. Story goes that the owner had this car for 7 years, 3 of those years it sat under a tree, letting nature do what it does best - weight reduction.

After posting a photo of AW11 #5 to my very neglected Instagram, a guy called Joel (from Hive Posters) got in touch and told me that he used to own the car years prior! He was a little disappointed in the state the car was now in, as apparently when he had it, there was no rust in sight. I guess that's what 7+ years can do!

At the current stage all I've done is strip most of the exterior down, in the search for all rust spots, along with a brief interior teardown, and a few panel-beater visitors to offer various quotes - The overall consensus seems to be around the 2-3k mark.
I stupidly snapped the C pillar plastics before consulting the forums on proper removal, so a few parts are needed.

First job will be to get the worst of the rot cut out and patched
replace rubber seals (leaking on both drivers targa, and boot)
Take it in for a WoF
Fix whatever it fails on
Replace belts/fluids/ other consumables in motor/box
look at updating brakes/suspension etc
fix whatever rust is leftover
Respray
Maybe manual conversion? still unsure

Photos of the car back in its glory days, and of how it currently sits. Registration is currently on hold and all mechanical components appear to be working correctly. Due to the seller living only 10 minutes from my home, i may have just opted for a 10 min road test rather than towing it

Past photos (forgive size and quality, i just took screenshots as idk how to save instagram photos) 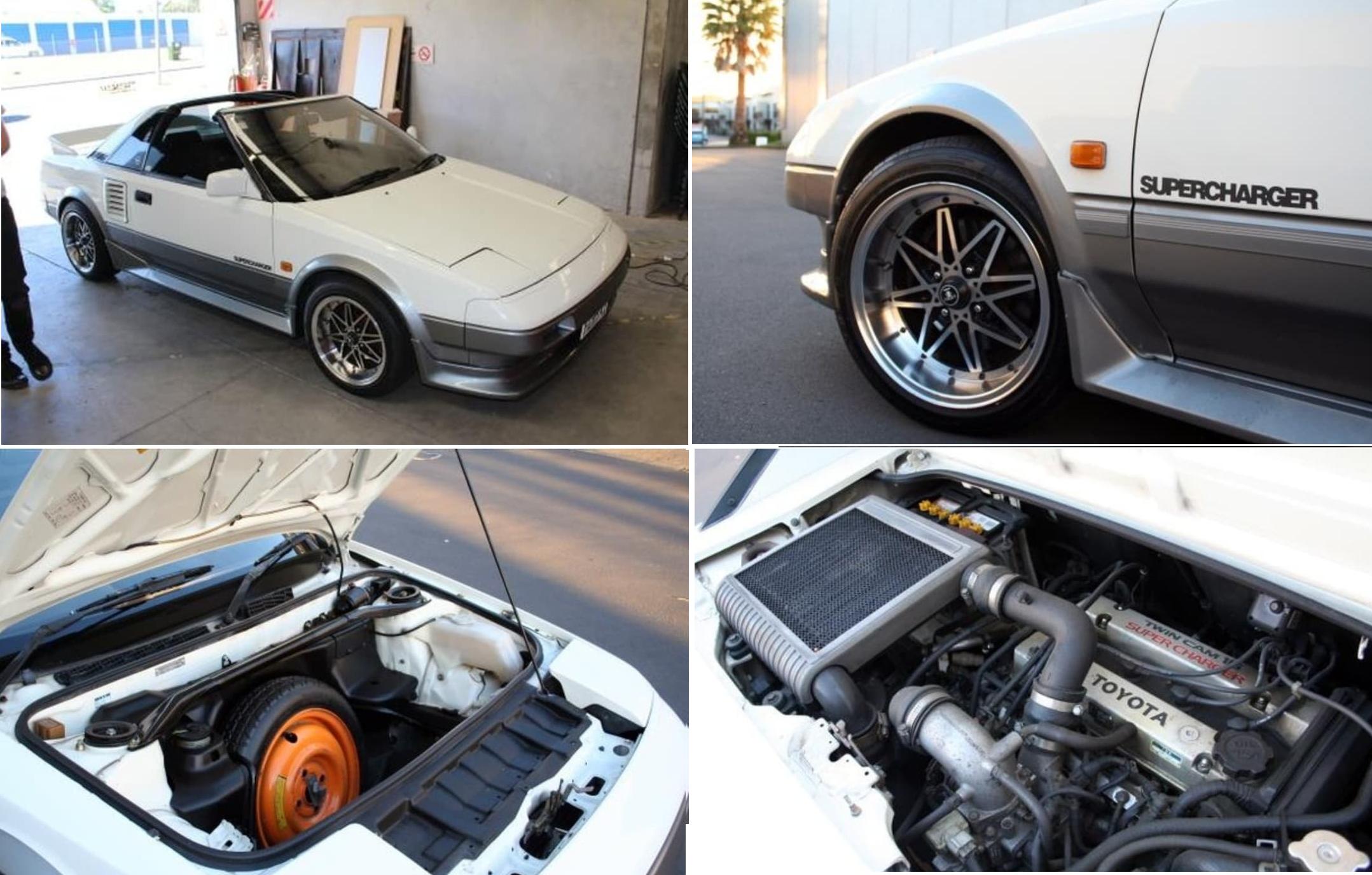 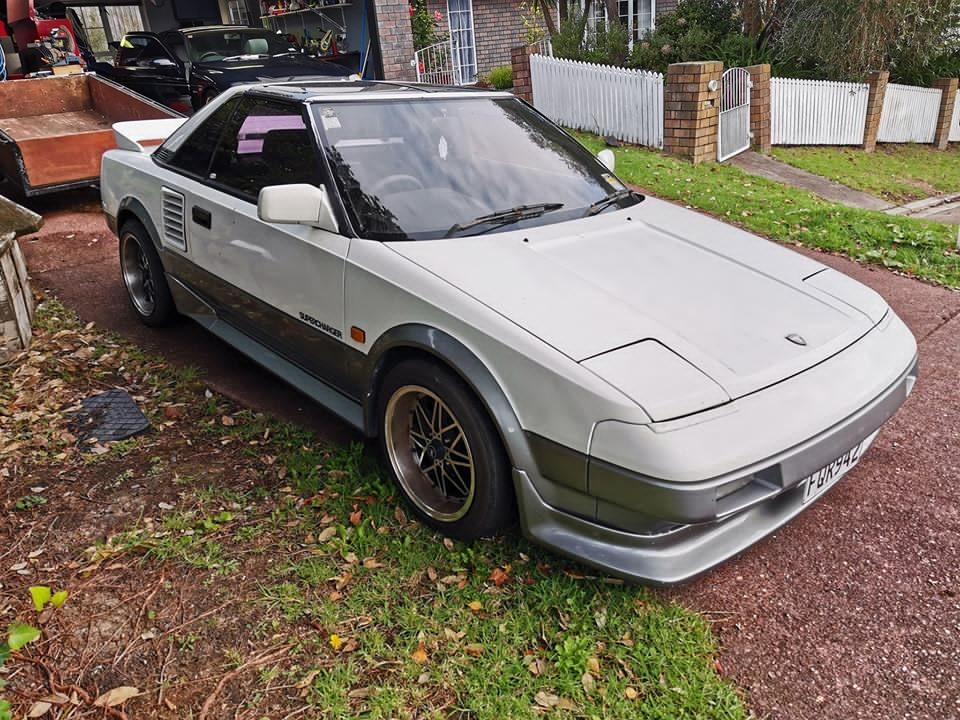 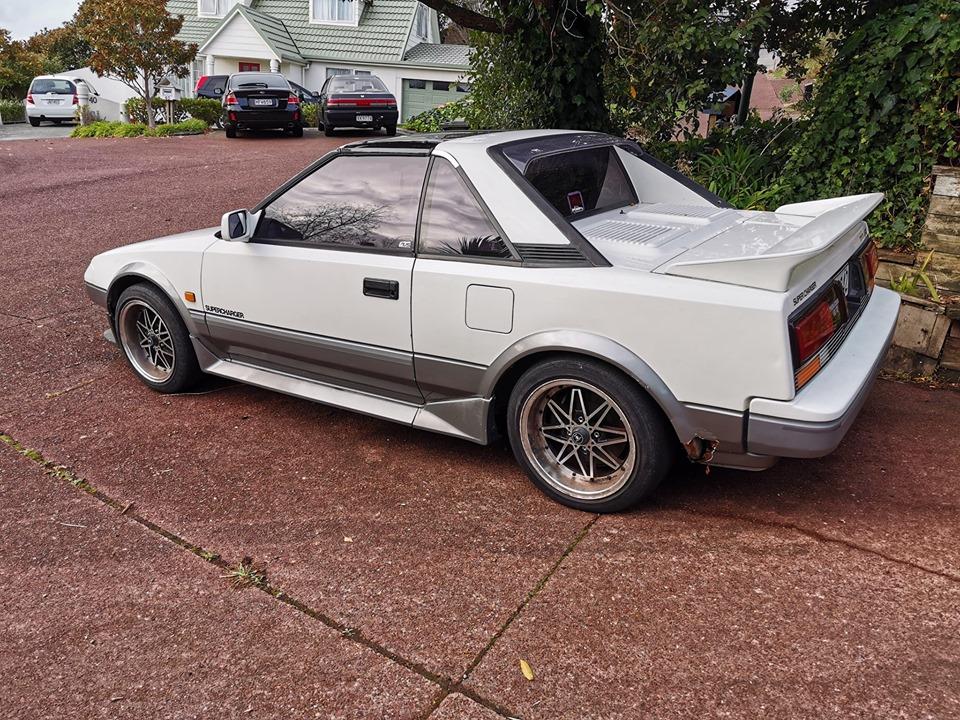 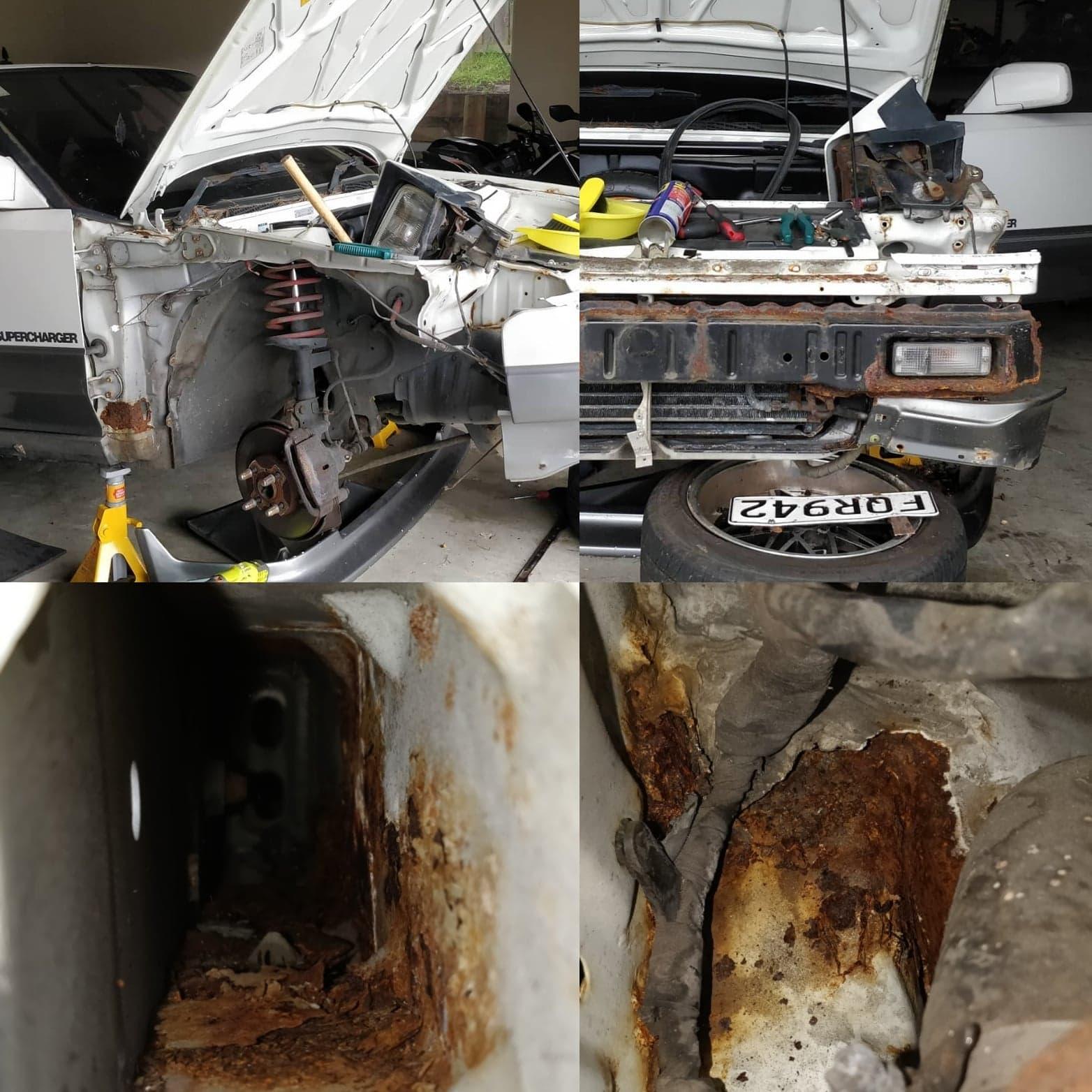 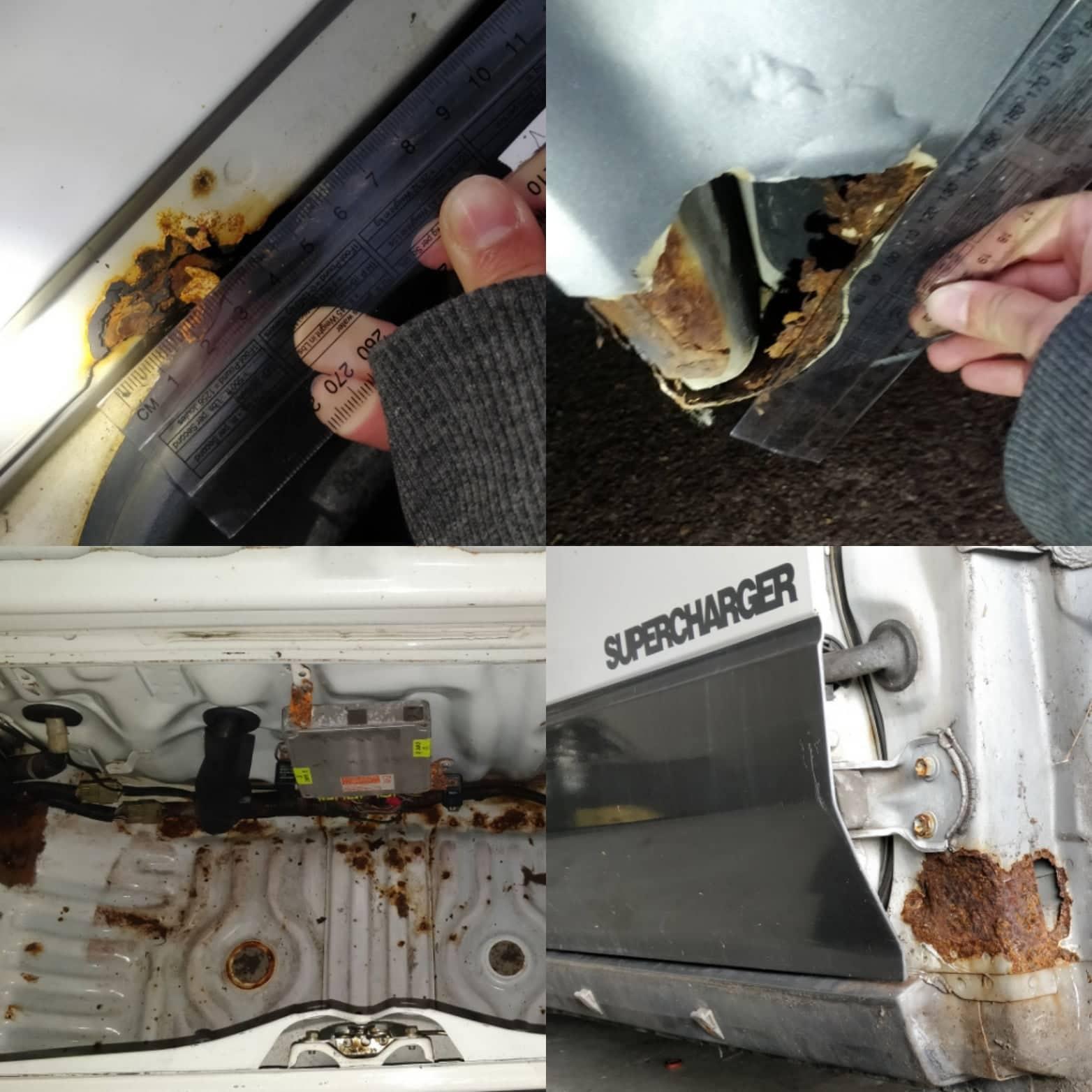 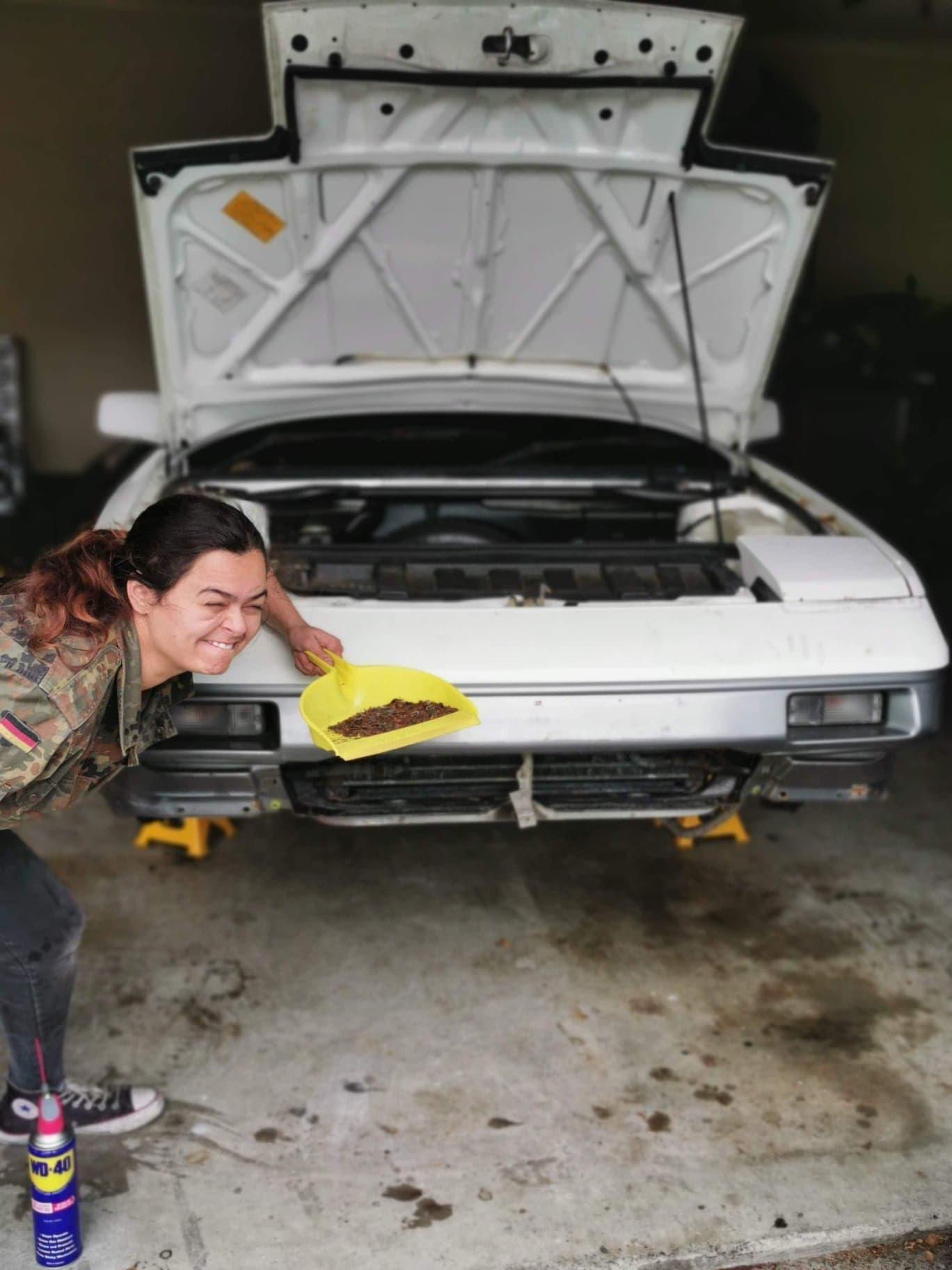 In all honesty, this project is a while from completion. The negatives of owning a small fleet of 2 stroke motorcycles and an E46 M3 is they have tendencies to hemorrhage cash without notice.
Top

Wow. The rain sure did get to it.

I know Joel (real good bloke) and the car was indeed a pearler when he had it. Sure hope you can get it sorted successfully. And I'm very glad to hear the rust is going to be replaced by new steel and the job done properly. Cos you're right, there's nothing quite like an AW to put a smile on your dial.

A little update on the supercharged nug!

Dropped it off to the panelbeaters last sunday. we spent about 30 mins just going over the car more thoroughly and marking out what is to be repaired, Yesterday the windscreen was removed to expose some more rot, along with the rear drivers quarter to fix up the gaping hole.
So far im about $800 in (from just windscreen alone) as the original one did have some cracks in it.
Work officially starts on the car today, so pretty exciting!

@mattaw11 - I'll fire you a message if that offer is still up?

Went to check up on the car this morning - so far so good!
most of the holes were cut out and new steel was welded in, along with rust kill and topped off with some kind of silicone sealant, apparently the same stuff used in underseal. He mentioned this stuff can be painted over (recommended getting the car painted right after this is all done)

Should be another week or so for the lil nugget to be (more or less) rust-free!

There were some holes in the chassis rails which have been patched up, and the whole of both rails been lathered in rust kill and the unserseal

Sounds all too familiar!! Glad it’s getting a new lease on life.
Top

AAAAAAAAND like that the nug is back home!!
I was a little nervous about the tow home as the repairs have been coated in primer, which apparently can absorb moisture, but thantfully there was a break in the weather for when it arrived.
Car is understandibly rather messy, this weekend it'll definitely need a good vaccuum. Photos have been taken and sent off to various paint shops. Hopefully I can get some progress on that front in the next couple weeks.
Cost for repair: $2600
Got it repaired by a guy called Rob who lives near silverdale, his business name is "Robs Body Shop"

While im out gtting paint quotes, i need to address finding a replacement bumper support bar, as that will certainly slow my goal of "road legal by christmas"
Here are some photos attached. Needless to say im a very happy lass right now!

Photos havent uploaded in order, but you get the point!

UPDATE:
Managed to tick off a big job on the adub a few weeks back.
Reuben from Sinful Custom Cycles took it upon himself to transform my rotten bumper reinforcement bar into something that looks new!

Only major component/jobs left before her first wof (in 3 years!) is:
- Replacement windscreen, so if anyone has one lying around (pref bronze tint to keep everything matching) please shout out!
- A full respray. I want it to look as tidy and presentible as possible.

Have a couple quotes for a repaint (which is next on the list) which will be around the 4k mark. little steeper than I originally hoped for, but I really want this car done ASAP so will just have to grit my teeth and be done with it.

You going to respray the same colour(s)?
Check out my posters http://www.hiveposters.storenvy.com
Top

the paint is semi-necessary as all the rust treated spots are just coated in primer.
Top

Nice, look forward to seeing it back to its former glory (well even better than that)
Check out my posters http://www.hiveposters.storenvy.com
Top

Joel wrote:Nice, look forward to seeing it back to its former glory (well even better than that)

Hopefully!
Will defnintely bug you later down the line about decals etc (assuming you had them done previously?)
the little sticker of the car is still on the rear screen too!


Sadly my goal for it to have a wof sheet by christmas wont be reached. Unsurprisingly the italians have decided to behave like italians (Both the 2 strokes are due rebuilds - which was planned to be fair) but the worst is that stupid red italian...
"Modern Ducatis are reliable"

Sounds good, I have all the factory style decals on file, so can produce.
Don't have that exact rear screen decal anymore but have this one

Check out my posters http://www.hiveposters.storenvy.com
Top

as of last week, the nugget is officially in the paint booth!
I managed to wrangle up a small army of mates to help me totally strip and sand down the car ready for prep, before borrowing the work ute/trailer and carting her off to the local paintshop!

It's repainted in the OE scheme, however I have opted for a clearer white, over the almost beige factory white. it's a much more crisp look!
there were a couple mishaps with one of the doors, which is being rectified today, along with the smaller bits like the eyelids and the such.
Assuming all goes to plan I should be able to begin reassembly by tomorrow!

With that out of the way, and a windscreen POTENTIALLY sourced, i'm left now to just start hunting around for lesser important items, such as a spare set of facelift taillights (more on that later

), c pillar plastics, wheels (potentially found a set), and at least entertain the idea of an SC manual conversion.

Once reassembled i'll chuck her up on a hoist and give the car a thorough inspection, taking particular care at consumables this time round "rubber seals, fuel lines, brakes etc"
The windscreen probably wont arrive till late jan, so i have plenty of time to go over the car and clean/ replace stuff too far worn.

Apologies for the portrait shots. I took them all for instagram story, landscapes were too small annoyingly.. photos from here on will be landscape though!